Personalised Medicine Conference 2021. Prof. Angela Brand: ”Trust should be at the center of the Public Health Renaissance” 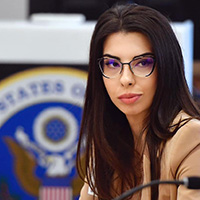 On December 16th, the Centre for Innovation in Medicine organized the 6th edition of its annual Personalised Medicine Conference. The theme of the event was The biological revolution of the Fourth Industrial Revolution. The first session was dedicated to “ Genomic advances that made a difference in the pandemic and best practices in viral surveillance”.

The event started with a Fireside Chat with Dr. Marius Geanta, President of the Center for Innovation in Medicine, and his special guest, Prof. Angela Brand, from the Maastricht Economic and Social Research Institute on Innovation and Technology, Maastricht University, The Netherlands.

You can watch the session here:

Prof. Brand mentioned the major technological developments, in the last 20 years, with impact in healthcare and public health.

“The social innovation, I think, started with the rare disease community, with people who want to be more involved in decision making, people who want to be in the driving seat and control their health data. This is a very good movement, and we need new governance models to allow this bottom-up approach such as data cooperatives. When it comes to innovations in technology, genomics was the first field on the rise and a little bit later it was the move of Big Data and AI, machine learning, which are actually enablers. The milestone in public health, is, in my opinion, epigenomics, which combines social and biological sciences. Now we understand more how social environmental and behavioral factors are, on a daily basis, changing our genomes. This is a dynamic process which helps us understand diseases.”

“People used to say that personalized medicine is not public health, but we should remember that over 100 years ago, Winslow mentions population-based strategies, stratified and individual ones. The public health genomics networks we started 25 years ago have become mainstream nowadays. There was a lot of skepticism in the beginning, especially within the public health community. We should not wait another 25 years, we should act faster”

“Surveillance has always been a key task of public health, at the European and local level. The messages did not change at all. During the pandemic we learnt to apply digital tools faster, we can now use real-world evidence and make predictions with high certainty. We were already talking about syndromic surveillance. The next step is to include individual genomic information, underlying pathways, and patterns to explain why people have different severities of COVID-19, why fatality rates are different, why drug treatment and responses are different. Not only between continents, but between individuals. It is important to do population-based genomic sequencing” – Prof. Brand

The Fourth Industrial Revolution is built on the digital revolution that has been occurring since the middle of the last century and it is characterized by a fusion of technologies that is blurring the lines between the physical, digital, and biological fields. COVID-19 has accelerated the implementation process of the fourth industrial revolution.

“We are sequencing a lot of viruses, to understand the variants and make predictions on future mutations and to understand their impact. With syndromic surveillance and genomic data, our major objective should be to assess the risk to have a mild or severe disease, at the individual level. For this, we need a lot of technologies in place and means to share and analyze the data. Digital health is an essential part of the fourth industrial revolution, and we see a lot of digital transformation even outside of healthcare.” – Dr. Marius Geantă

“People don’t differentiate between digitization and digitalization. The first refers to the format of data, it means to go from analog to digital, which is a major step forward but in Europe, many local health departments are not there yet. Making sense of the data is a challenge. Digitalization involves using the data for real-world prediction and decision-making and requires radical transparencies.  We observe many countries are obsessed with privacy, data security, but if we look at young people and how they react to it, it confirms that it is part of our daily life. “ – Prof. Angela Brand

There are differences between countries related to cultural backgrounds, trust in governments, and leadership. At the European level, there is a major need for better governance and models of best practice.

„In Taiwan, they used digitalization for a long time, they have trust in the government, and they deal with these technologies in a good way. This is why they did so well in the pandemic. In Europe, there are differences between countries and a general lack of trust. Countries such as Estonia and Finland have digital infrastructures already in place in the healthcare systems. It is interesting to see how different Member States interpret data, there is a lot of room for interpretation. What is currently missing is to give member states guidance in terms of what best practices.  France is an example of good practice, with a lot of national investments in digitalization (cities, insurance, hospitals and public health services) combined with centrally set rules and frameworks. I hope that with the new EU Presidency this model will have an influence in Europe.” – Prof. Brand

“When I look at the media communication around COVID-19, with different opinions in the media from different specialists, people got lost and they lose trust. What is positive change is that we see health in all policies. However, it was disappointing that some other sectors explicitly tried to exclude health, such as the economic sector.

Public health was always the little brother of medicine, but the pandemic pushed the public health renaissance.

“I am skeptical that we are ready for another pandemic. The second wave hit India a lot, but the government responded and showed leadership. In Europe it is different, we have a European strategy but in the end, it depends on member states. Portugal has a former Admiral in charge of the management of the crisis, with expertise in good management. In Austria, Germany and the Netherlands, it is a sad picture. In Germany for example, I recently heard the news about people who went on the streets to protest against vaccination. (…) I don’t think a European concept can help; we need a European strong leadership, like a “Churchill”. Maybe in half a year, we will have this under control with booster vaccination, procurement mechanisms for countries that cannot afford vaccines. We need strong European guidance and procurement. (…) I’m impressed with what G7 initiated, not only on COVID-19 but also efforts against antimicrobial resistance. We should think of Europe in the global context and what other players are there, not just the European Commission.” – Prof. Angela Brand