The Centre for Innovation in Medicine is an European research & innovation organization, with interest in innovative health policies and civil society education. The aim of the Center for Innovation in Medicine is to shorten the time between the emergence of innovations and their application for citizens benefit. We develop programs to educate, inform and engage all audiences about innovation in medicine in an attempt to create a friendly environment for early adoption of innovative technologies, ideas, products and services, serving as an independent platform for informed dialogue between all stakeholders in the field of omics medicine, personalised (precision) medicine, digital health, data oncology, immune-oncology, cancer research, biotechnology, systems biology and other hot scientific topics. Read more about our policy papers, here.

Centre for Innovation in Medicine in 2021:

Just wait and see what’s next!

State of the Health in Romania: European Commission cites Centre for Innovation in Medicine as a reference for the innovative vision on the implementation of the European Cancer Plan in Romania. 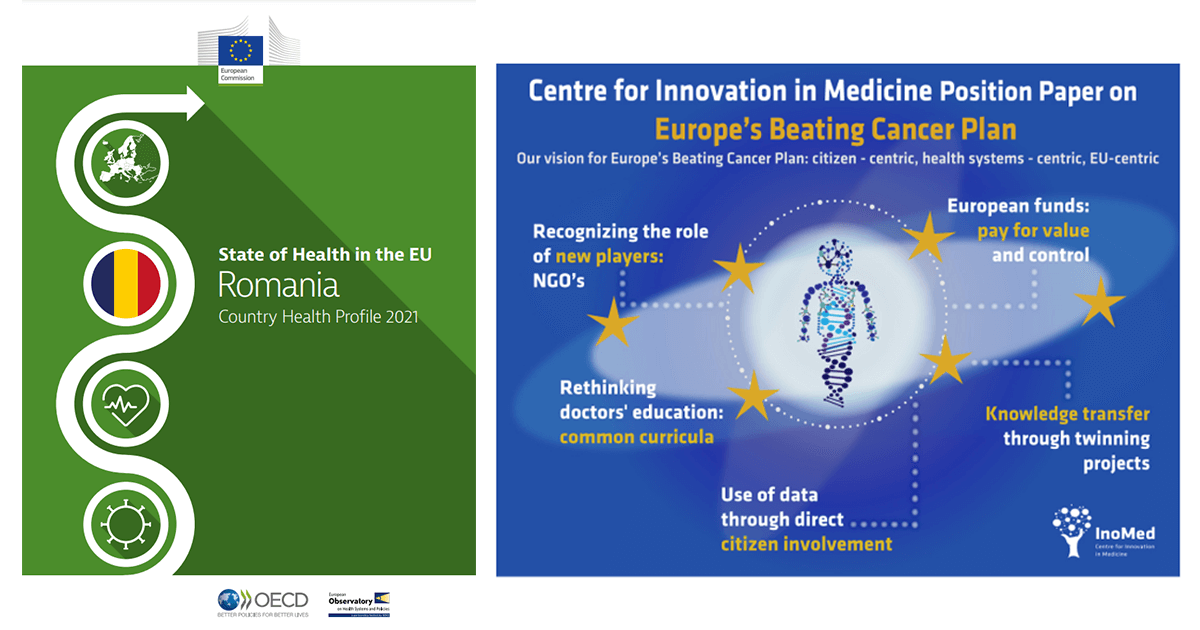 The European Cancer Plan represents an unprecedented opportunity for countries like Romania. The Position Paper launched by the Centre for Innovation in Medicine in May 2020 is cited in the Report because of its Innovative Vision on how the European Cancer Plan should improve cancer management in Romania, while reducing inequalities between and within Member States.

On December 16th, the Centre for Innovation in Medicine organized the 6th edition of its annual Personalised Medicine Conference. The theme of the event was The biological revolution of the Fourth Industrial Revolution. The first session was dedicated to “ Genomic advances that made a difference in the pandemic and best practices in viral surveillance”.

The event started with a Fireside Chat with Dr. Marius Geanta, President of the Center for Innovation in Medicine, and his special guest, Prof. Angela Brand, from the Maastricht Economic and Social Research Institute on Innovation and Technology, Maastricht University, The Netherlands. 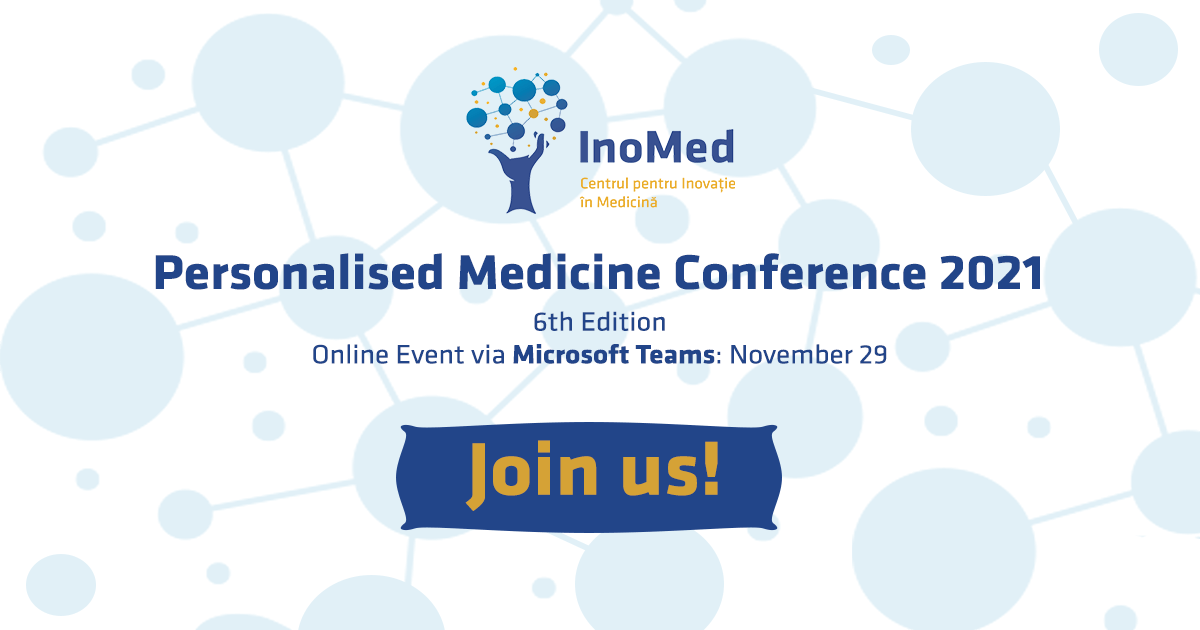 “Surveillance has always been a key task of public health, at the European and local level. The messages did not change at all. During the pandemic we learnt to apply digital tools faster, we can now use real-world evidence and make predictions with high certainty. We were already talking about syndromic surveillance. The next step is to include individual genomic information, underlying pathways, and patterns to explain why people have different severities of COVID-19, why fatality rates are different, why drug treatment and responses are different. Not only between continents, but between individuals. It isimportant to do population-based genomic sequencing” – Prof. Brand 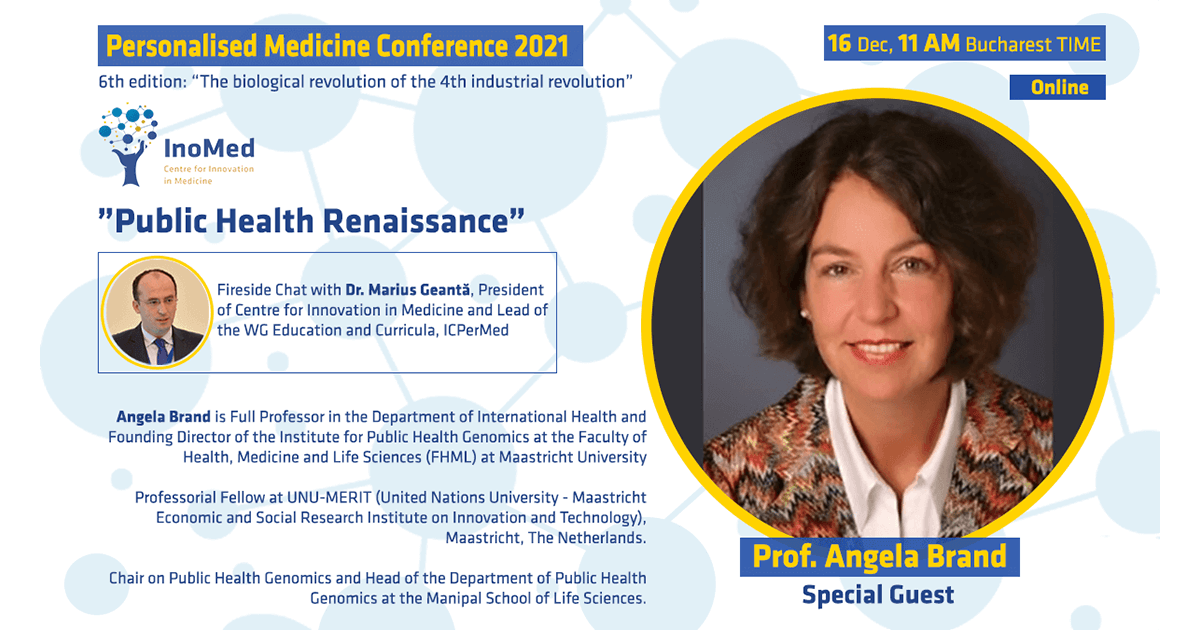 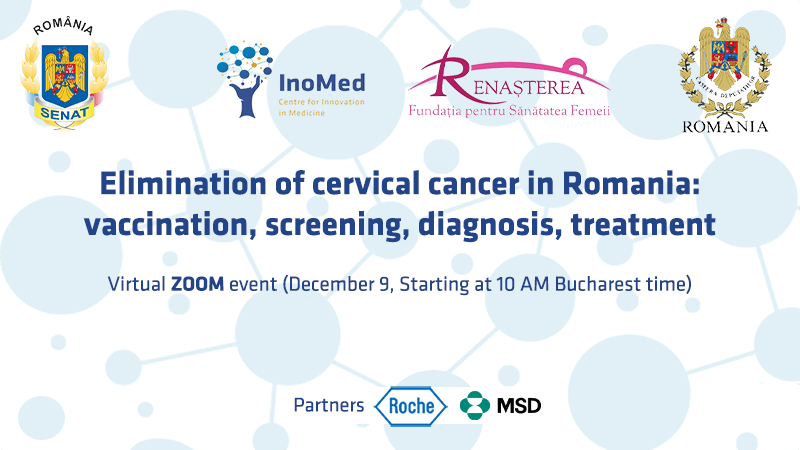 The Center for Innovation in Medicine and Renașterea Foundation, in collaboration with the Romanian Parliament, organized on December 9, starting with 9 o’clock CET, the online event “Elimination of cervical cancer in Romania: vaccination, screening, diagnosis, treatment”. More details, here.

The event ”Achieving Equity and Innovation in Newborn Screening and Family Hypercholesterolemia Pediatric Screening Across Europe” took place on October, 11 in virtual format and brought together representatives of the Slovenian authorities, representatives of the European Parliament and the European Commission, as well as civil society and patients. Dr. Marius Geantă, President of the Center for Innovation in Medicine and Co-Chair of the FH Europe Scientific and Public Health Advisory Group, spoke at the event about the need for innovation in cardiovascular disease management and how family hypercholesterolemia can be a model in this regard: “Talking about innovation is an obligation, a duty, a mission and it is the only acceptable way to move forward.” 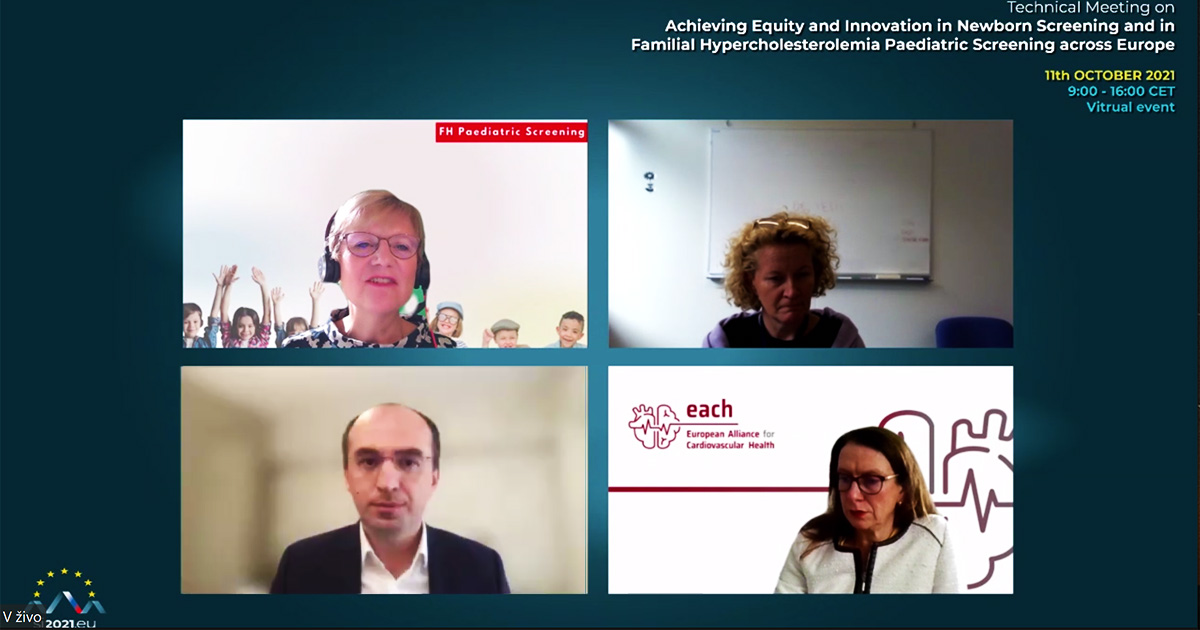 During the Launch of the European Alliance for Cardiovascular Health – September, 27, Dr. Marius Geantă, Co-chair of Scientific and Public Health Advisory Group, FH Europe, answered the question ”What the Alliance is asking for?” “To date, the EU focused heavily on combating cardiovascular disease as a lifestyle disorder. CVDs are perceived as a consequence of unhealthy diets, lack of physical activity or exposure to certain environmental factors. Although these factors are important, it should be clear that many cardiovascular diseases cannot be prevented. They are inherited or congenital, or occur due to functional decline or are the result of other chronic conditions or therapies.

For example, familial hypercholesterolemia (HF) is a common, life-threatening genetic condition that, if left untreated, can lead to early myocardial infarction. So the EU should not just focus on primary prevention. And it could start by taking a more holistic approach and by proposing solutions throughout the disease, from personalized prevention, early detection and screening, and access to care and treatment, to improved rehabilitation and care after illness.

The EU should also support the use of innovation to prevent cases of myocardial infarction and stroke that can be prevented by personalized prevention. And I think FH could be a role model for that. Today’s meeting could certainly be a huge step for European citizens and patients.”

On the 24th of September, Dr. Marius Geantă was the moderator of the Webinar on Familial Hypercholesterolemia as an evidence-based model of innovation in Cardiovascular Diseases. Read more about it: 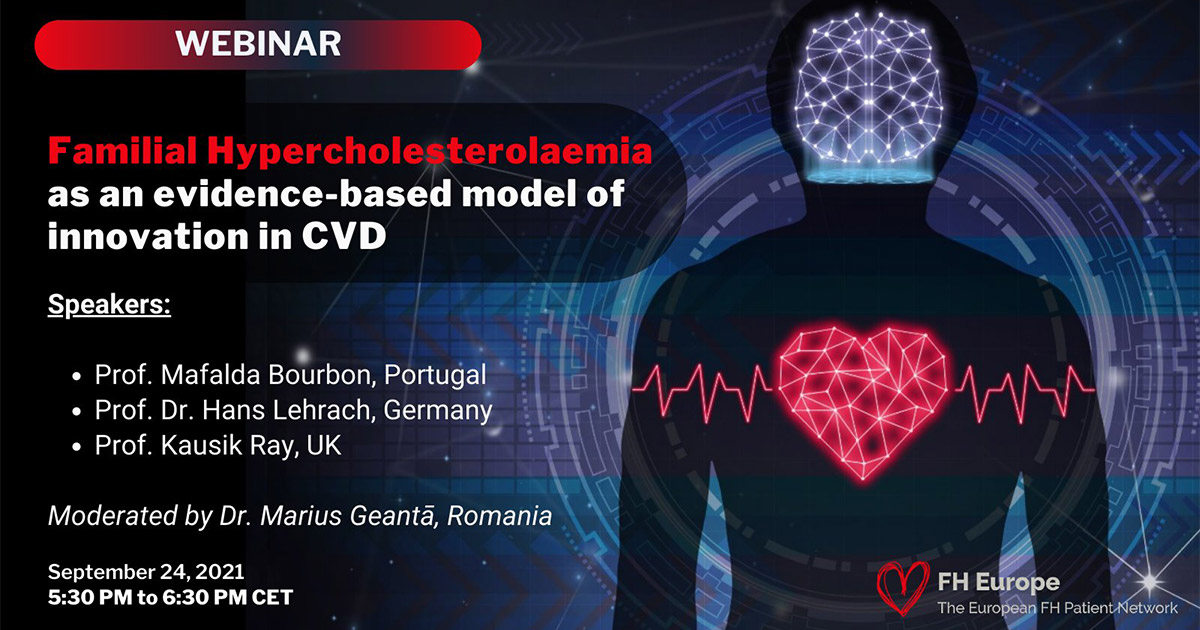 On September 10th, DG SANTE organized a webinar on the priorities, strategic orientations and the needs to be addressed through the EU4Health annual work programmes, building on the outcomes of the targeted consultation organized during the summer of 2021.

Disease prevention and health promotion represent the most urgent needs to be addressed in the next programming of EU4Health, starting with 2022, according to the inputs from diverse stakeholders (NGOs, associations, businesses, Member States’ policymakers, patients’ organizations).

Around 20% of all premature deaths (below the age of 65) in the EU are caused by CVD. CVDs are caused by so-called modifiable or non-modifiable (inherited, genetic) risk factors. The world’s most common and non-modifiable CVD risk factor is Familial Hypercholesterolemia (FH). Less than 10% of those born with FH, are diagnosed and adequately treated, leading to heart attacks, strokes, heart disease and deaths, early in life, even as early as 4 years of age.

During the webinar, Dr. Marius Geantă, President of the Centre for Innovation in Medicine and co-chair of the Scientific and Public Health Advisory Committee at FH Europe, presented a proposal on the implementation of evidence-based paediatric screening and early detection programs for FH at the EU level. More details.

The “Big C” won’t wait for the Covid-19 pandemic to be over and neither should Romania or any European state. Follow this link for all the information about the event. 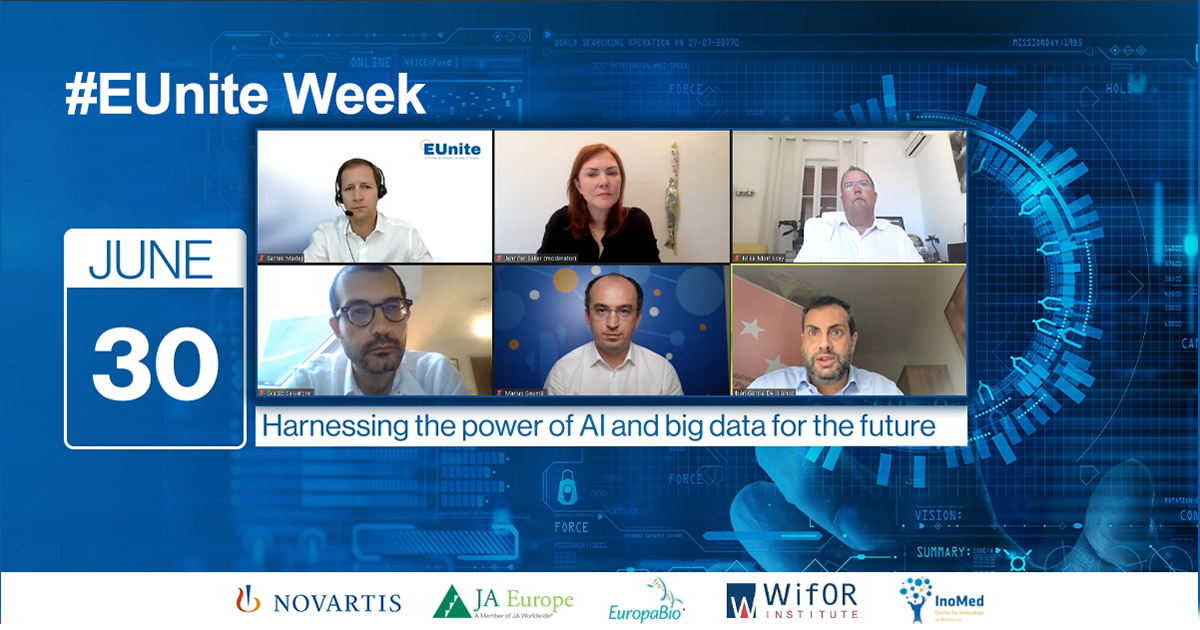 Marius Geantă, MD, president of Centre for Innovation in Medicine, was a speaker on the 2nd day of the event: “Technology has increased the resolution at the society level. 4K resolution, many times AI-enabled, is the gold standard in many of our daily activities: watching movies, football matches, playing video games, videoconferences and so on. But can we say the same about health, about the health system? Probably not. There are diseases, hospitals, medical specialties, or even cities or countries where health or medicine could not be considered yet as high definition or 4K medicine/health. The data either does not exist, is not collected and integrated, or is used sub-optimally, or is used incorrectly or is impossible to use. An analysis of the determinants of health shows us how great the potential of health data and non-biased AI is and how little we use from what data we already produce or could produce, as a society”.

Dr. Marius Geantă is a pioneer in the field of personalised medicine in Romania and Central Eastern Europe. A vast majority of his projects involve precision and personalised medicine in oncology. His joining of the FH Europe – The European FH Patient Network comes at a time when the scientific knowledge accumulated until present facilitates the application of prevention in cardiology through genetic testing programs. And Familial Hypercholesterolemia has the potential to become the engine that drives these efforts forward. 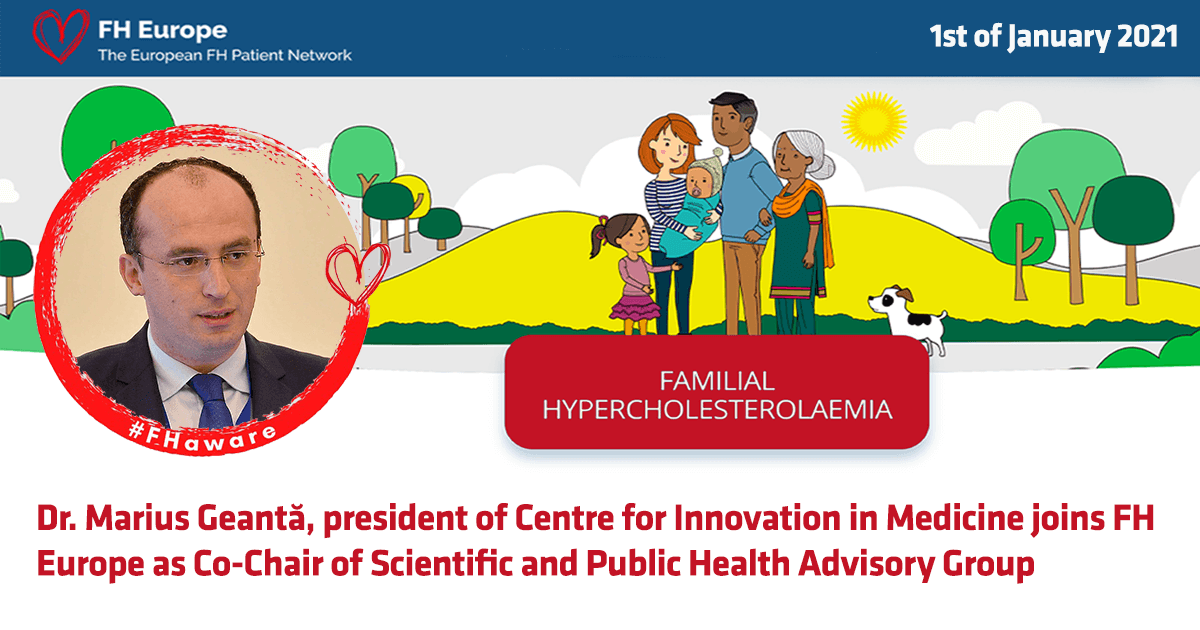 Innovation must be a factor that unites the Eastern and Western Europe by reducing the inequalities between member states when it comes to prevention, screening, early diagnosis, treatment or palliative care.

Levels of health inequality between countries and regions with respect to cancer prevention, control, access to treatment and survival can no longer be ignored. Inequalities also occur within countries, between regions, and between social groups.

The Centre for Innovation in Medicine organised the fifth edition of the Conference on Personalised Medicine. It took place virtually via Zoom. The Conference was planned in the context of the European Biotechnology Week 2020. EuropaBio was the event partner. The event gathered representatives of the authorities, academia, professional societies, patient associations and industry. Our main sessions evolved around discussions on building resilient healthcare systems. 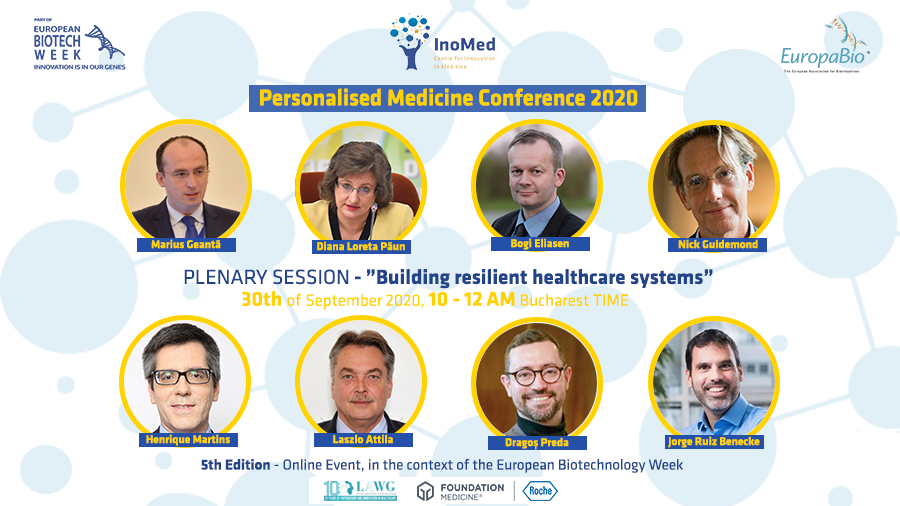